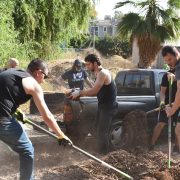 Encompassing 14 acres behind Jackie Robinson Stadium on the West Los Angeles Veterans Affairs (VA) Campus is a garden undergoing restoration. At one time, this space was a fully functional sanctuary for veterans, as well as a food source for local restaurants. After nearly ten years of abandonment resulting in overgrown natural grasses, UCLA is teaming up with the VA to restore it. UCLA has worked closely with the VA for years through various capacities, such as providing doctors and volunteer events. Despite the presence of this VA, Los Angeles has one of the highest rates of veteran homelessness in the country according to Quil Lawrence of NPR news.

Gardening’s popularity among veterans has risen as of late. Chicago already has a prominent space for veterans to garden in their City Botanic Garden. Just like West LA’s potential garden, the Chicago Botanic Garden has a historical relationship with vets. In 2013, a group of therapists visited the garden and realized the potential it had for therapy. They initiated the momentum to get Veterans more involved through the foundation of a horticulture therapy program with a specific curriculum for planting and harvesting.

Joanna Wise, a prominent horticulture therapist in Chelsea, London, elaborated on the benefits of gardening in her book Digging for Victory: Horticultural Therapy with Veterans for Post-Traumatic Grow. Horticulture therapy simply refers to therapy programs utilizing gardens and other outdoor spaces. According to her work, human beings “have an emotional affiliation to other living organisms, which is part of our species’ evolutionary heritage, and a competitive advantage.” This level of emotional connection is especially important for those with otherwise stressful conditions, like many veterans. Colt Gordon, President of the Student Veterans of America at UCLA is a key supporter of the VA Garden restoration project. Colt is a 4-year Marine Veteran who finished service in 2011. He told me his life has “been an incredible journey. In 2013, I was your typical homeless veteran. I had mental health issues, but I overcame them. I come from a broken family due to drugs and alcohol. I’m very open about these things because I think it’s more useful than hiding behind the stigma. Now I’m at UCLA and I want to promote and perpetuate healthy living throughout the veteran community. I’ve started here in this garden. Our goal is to turn this into a fully functional agricultural center that will help feed our community.” According to occupational therapist Barbe Kreske at a “garden, [Veterans] receive therapy while learning job skills. Job training is important for Veterans as almost half a million are unemployed.”

Through restoration, the garden is also hoping to address malnutrition, a common health problem among veterans due to, among other factors, high rates of food insecurity. Local and organic produce grown in the garden will be distributed back to the veterans on the VA campus. There’s even a test kitchen on site to help them learn about healthy cooking. Jesse Flores, the VA Garden Restoration Program Assistant, graduated from UCLA last year with a degree in Geography and is now pursuing a master’s in Urban Planning. According to Jesse, “just working and being at the space is where my interest in the built environment comes from. I love learning and seeing how built environments can promote health among at-risk communities, such as veterans, who need our help. This space can become a fully functional agricultural center that will not only help feed our community but also help homeless veterans get jobs.”

At the moment, beautifying the entrance to the garden is prioritized, as this is the first place everyone will see when they enter. Different zones of the 14-acre space will be worked on individually and then tied together upon completion. Maintenance is difficult as well. Jesse and Colt, as well as other members of the team, welcome any help or advice at the garden. If you would like to get involved, please fill out this sign-up form for volunteering. Volunteer dates will be announced shortly. Additionally, on Wednesdays at 6pm meetings are held at the Veteran’s Resource Center  located on campus in Kerckhoff Hall, Suite 132 for anyone interested in helping with the garden. Supporting this effort is a great way to learn gardening techniques while giving back to those who protect our country.

Teddy Tollin is a third year Geography major and Geographical Information Systems minor at UCLA. Besides working at his position as the BEWell pod blogger, Teddy is a member of the Transfer Student video team, Co-Chair of the Built Environment Public Health Coalition, and is passionate about Urban Planning.